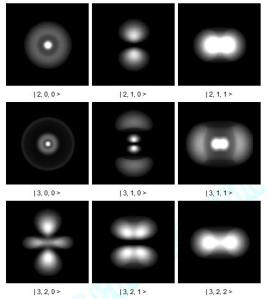 Some Probability Densities for Excited Electrons in a Hydrogen Atom

There are many in the area I live in who believe that the more educated you are the less likely that you would be able to have faith in God.  My husband was excited to finally have a staff position as an Associate Pastor for a small church.  I was in graduate school at the time working on a Master’s in Chemistry.  The pastor and his wife were unable to accept me as a believer because of my education.  I never got the chance to tell them that it was my education that heightened my faith.

In February 2009, Chemical and Engineering News cited a recent study:

Now, researchers at the University of Illinois, Urbana-Champaign, and the University of Chicago provide some insight as to why. According to “Science and God: An automatic opposition between ultimate explanations,” published in the January edition of the Journal of Experimental Social Psychology (DOI: 10.1016/j.jesp.2008.07.013), a person’s unconscious attitudes toward God and science are fundamentally opposed because they offer competing and logically incompatible explanations for the same phenomena.

The more I studied Chemistry, the more I became convinced that none of this could be an accident.  The complexities of electrons in their various energy states within a molecule is mind boggling and in no way a happenstance.  It is incomprehensible to attribute our very exsistence to a Big Bang.  The highly complex equilibrium that is our planet could only have come about by a creator.

I am not alone in a greater faith because of a scientific education.  Many of the great men of science that created the foundations modern scientists now take for granted were men of faith.  It is sad to see Higher Education turn its back on God, and in the process lead whole generations astray.

“The deeper one penetrates into nature’s secrets, the greater one’s respect for God becomes.”

“Atheism is so senseless.  When I look at the solar system, I see the earth at the right distance from the sun to receive the proper amounts of heat and light.  This did not happen by chance.”

“The more I study nature, the more I stand amazed at the work of the Creator.  Science brings men nearer to God.”

The Noticer by Andy Andrews

Andy Andrews helps us find hope through his new book, The Noticer. This thought provoking read takes us through the lives a white-haired old man touched on one small section of the Gulf Coast. This is the story of Jones.  His patient lessons helped each one to find a new perspective, which in turn led to hope and then a life transformed.

“I am a noticer,” he said. “It is my gift. While others may be able to sing well or run fast, I notice things that other people overlook. And, you know, most of them are in plain sight.”

Andy himself was challenged by Jones to be more than the circumstances he found himself in; homeless, hungry and hopeless. Instead of a hand out, Jones taught him to see his situation in a whole new light.

“I notice things about situations and people that produce perspective. That’s what most folks lack – perspective – a broader view.”

Andy, like many others in his community, encountered Jones at a time that each one had reached the end of their rope.

“To be honest, I didn’t know what to make of all the stories about Jones appearing here and there or not being there when one turned around.  But there was a pattern, impossible to deny, of Jones being where something special was needed…”

I have been forever changed, challenged to be more by a new perspective brought about by spending time with Jones in the pages of this book. I would highly recommend everyone read The Noticer.

Disclosure of Material Connection: I received this book free from the publisher through the BookSneeze.com book review bloggers program. I was not required to write a positive review. The opinions I have expressed are my own. I am disclosing this in accordance with the Federal Trade Commission’s 16 CFR, Part 255: “Guides Concerning the Use of Endorsements and Testimonials in Advertising.”

As a chemist, I will offer my opinion that it is arrogant to believe that we can fix the most highly complex equilibruim that makes up the environment of the earth.   To assume that we can correctly predict the outcome of our actions is foolish.  On a small scale, we reap what we have sown.  Yes, we can cause a small locale to be polluted, but left to its own devices, nature will reclaim it. Granted probably not on any useful timeframe, but eventually.

Nature itself has caused periods of climate change. Before man had any technology, there have been periods of warming and cooling, i.e., ice ages. Another well documented example is that huge volcanic erruptions block sunlight because of the volcanic ash that is suspended in our atmosphere, thus causing a period of cooler temperatures. One suggestion brought forward to prevent global warming  is that we should shoot particulate matter into the atmosphere to protect us from the sun’s UV rays.   This could not have been thought out to a logical conclusion.

Consider this, if you block sunlight through the use of particulate matter suspended in the atmosphere you will cause a period of cooler weather. This in turn will lessen the growing season for farming due to these cooler temperatures and less available sunlight. This, in turn would lead to wide spread famine since food is now scarce. Now that plants don’t have adequate sunlight to fuel photosynthesis, we have don’t have the oxygen production we once had. Hand in hand with that, we also don’t have the CO2 being used by plants, causing it to build up in the atmosphere.  Eventually, probably after we’re all dead, nature will reclaim it’s equilibrium and things will grow once again like it always does after a volcanic erruption.

As for the greenhouse gases Americans contribute to the atmosphere as compared to the total volume present, how are we going to cause such a huge permanent shift in the climate to make all of this worth the pain it will ultimately cause? Especially since the rest of the world is NOT going to follow suit on CO2 control, isn’t this like spitting in the wind? We are ultimately going to cripple our own ability to survive in the global market for a plan no one can prove will work. Equilibriums are slippery stuff, sometimes you get an outcome you didn’t expect.

How about a safer alternative. Support Arbor Day, plant more trees. They like CO2 and they were here before we were.  No, I do not support pollution.  If you make a mess, clean it up.

Thomas Paine: On the Stimulus

This video says powerfully the message that we need to hear about what’s going on in Washington.

We the people have an obligation to honor our history and protect our future for our children.  We the people cannot let the momentum of the Tea Parties die out before we get Washington’s ear.  Let them know

THEY WORK FOR YOU!

Make your voice heard, contact your representatives both on the state and national levels.

We the people need to watch more closely what our representatives are doing to us.  The April 3, 2009 Press Release # 111-5 from the Congressional Joint Economic Committee warns that the projections used to calculate the budget deficits for the Administration’s proposal are flawed.

“The Democrats’ budget will add yet more deficit spending and debt to the huge amounts of each already in the pipeline. The result will be much higher taxes and inflation in the future, and lower economic growth. Higher inflation in coming years will further reduce the American standard of living as incomes and retirement funds are further eroded. The last time Democrats controlled both ends of Pennsylvania Avenue for a significant length of time was in the 1970s and stagflation was the result, so nobody should be surprised if history repeats itself.”

If the Joint Economic Committee is warning of dire consequences if the Democrats continue on their current course, then shouldn’t WE THE PEOPLE continue our outcry long past Tax Day. WE THE PEOPLE need to raise up a leader that we can all believe in. WE THE PEOPLE will deserve what we get if we just sit in our living rooms angry about what is transpiring, but refusing to get out of our comfort zone and remind our Representatives that

THEY WORK FOR US!

If you don’t know who your representatives are, follow these links:

US House of Representatives
http://www.house.gov/

Sitting at the Feet of Jesus

In the midst of railing against what is going on politically, we still need to sit at the feet of Jesus and let His wisdom guide us through the turmoil that encroaches our homes and our peace. This is not to say that it is not essential to speak up about where America is going. We can’t loose sight of the source of our strength, Jesus. We cannot become Marthas.

“Martha, Martha, you are worried and troubled about many things. But one thing is needed, and Mary has chosen that good part, which will not be taken away from her” (Luke 10:41-42)

It is so easy to get torn away from our time in the word and prayer. Mary sat at the feet of Jesus and soaked in everything she needed. My prayer for everyone that we can keep our eyes on Jesus; being strengthened and guided through it. I am blessed. If you call on His name, you will be saved.

This Texas Tax Tea Party in a park near NASA on April 15th was a peaceful demonstration born of the frustration many Americans are feeling about the spending Washington is doing with such wild abandon.  The liberal media outlets have branded the participants as “right-wing terrorists”.  This couldn’t be any further from the truth.  Certain tv reporters have also accused them of being racist.  Again, a ludicrous thought.  Don’t be fooled, it has nothing to do with the color of anyone’s skin.  They could be purple and this would still be going on.

What they don’t want you to hear is that it is the hard working people of this nation that have begun a genuine grassroots effort to change the course the current administration is headed.  The people gathered are concerned that the only likely outcome of the big federal spending is going to crush us all under onerous tax burden that will be justified as the only way to save our nation.  These people are worried that their Constitutional Rights are in jeopardy.

We the people of America deserve better than this from our elected officials.  We the people need to stand up and say no to all of it.  No more big government spending, no more entitlements, no more ridiculous pork projects.

Our founding fathers were wary of a strong federal government for this very reason.  If all of the power is vested in the hands of the wrong few leaders, our very freedom they gave everything for could be wrestled away while the people weren’t looking.